A DECADE OF A BUNCH OF PARANOIDS

Some person declared a decade ago

That the so-called originality was out of the question in China.

One decade has passed with ups and downs,

And a brighter future is expected.

It brings Lv the most gratification

That more and more people gather under this brand

And that changes are brought about in the industry and in many other sectors.

DO WE NEED ANOTHER CUP?

It was in the year 1999. Lv Yongzhong, teacher at the Design School of Tongji University and head of an interior design company, asked himself several questions. What is design? Do we lack a cup? What do we really need? 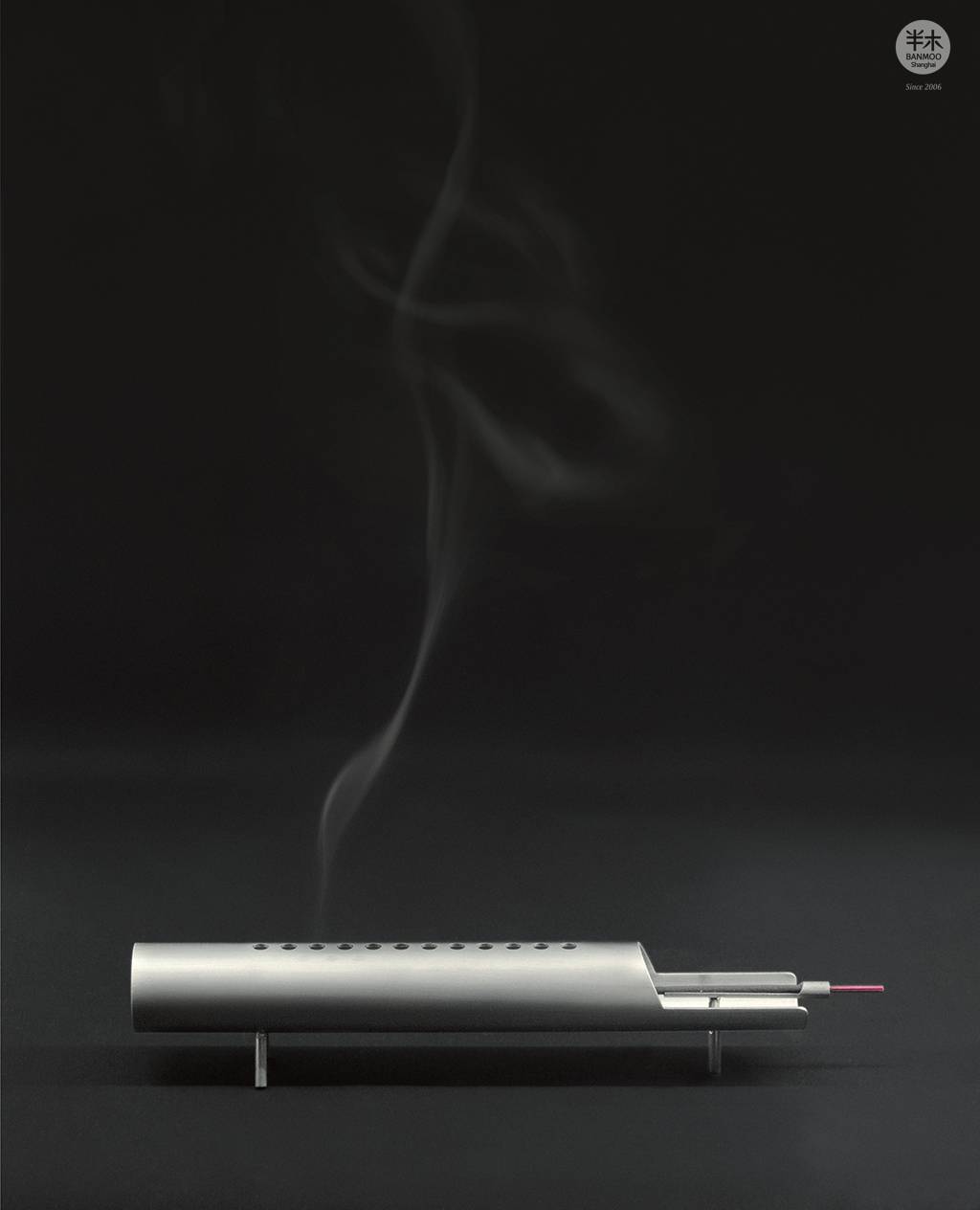 Then came the “Flute” incense burner.

Twelve holes. Twelve scales. Smoke rises from one hole to another as the incense burns, visualizing the passage of time. Lv Yongzhong called it “Time Visualizer”. The incense burner was warmly received by many customers, who gradually developed the habit of lighting an incense stick to appease their mind.

Our time calls for efficiency, which casts shadows of anxiety in people’s heart. For Lv Yongzhong, good design brings about quietness that is a momentary escape from the negative aspects of reality. Just like Zen meditation, it helps recharge ourselves.

Banmoo, literally half-wood, is furniture that thinks. It was born in response to contemporary urban life and stands for a philosophy of life.

WE GROW AS TIME PROGRESSES 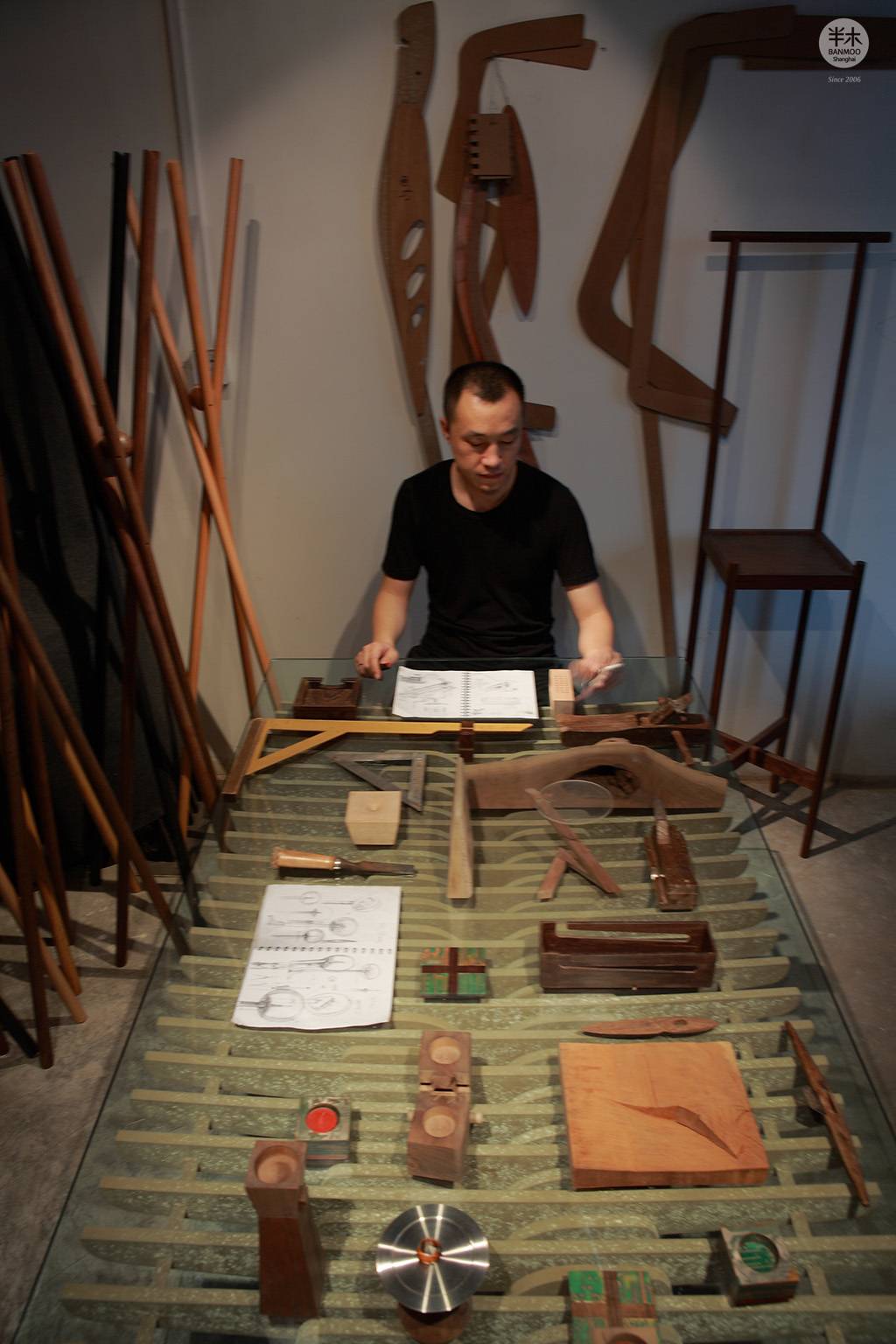 Lv Yongzhong set out on a journey to establish a system of his own in disregard of the status quo. People often asked why “Banmoo”? He asked himself the same question. What is Banmoo? Who am I? In fact, Lv Yongzhong had set up a carpentry research and development base before “Banmoo” was born in 2004. He learned from senior carpenters in order to develop a deeper understanding of various kinds of wood. He had special feelings towards wood that he believed defined the temperament of East Asian people. In East Asia, people have greater awe for nature, and wood—natural, warm, soft, as if breathing—reflects people’s cognition of the relation between human beings and nature. 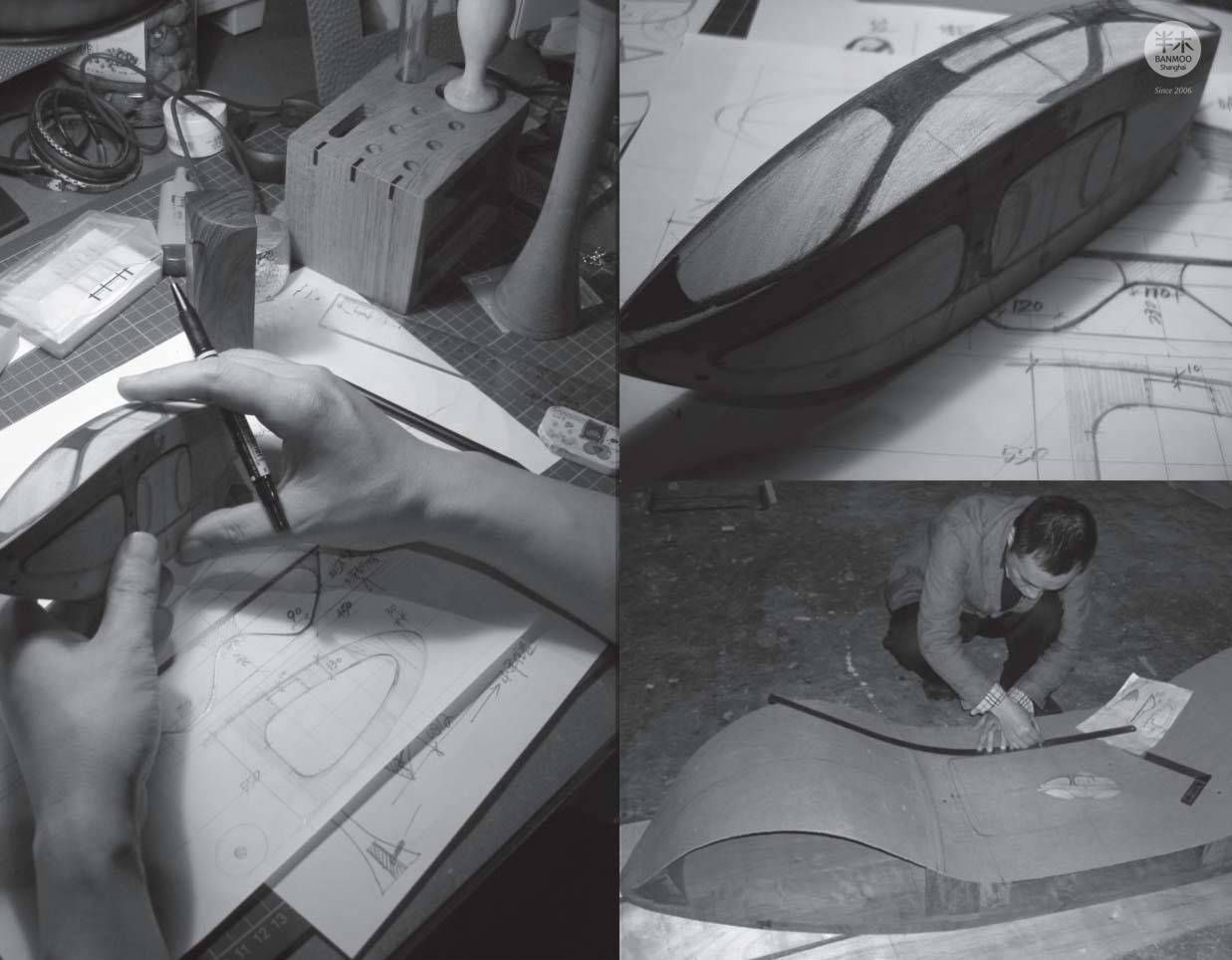 Banmoo, as the name implies, highlights the importance of halfness. Lv’s philosophy is to leave some emptiness for the users to fill in. Banmoo, like a “content generator”, shows unlimited possibility in response to the environment around. As a designer, more effort is put in reducing over-expression and presets so that the product has enough flexibility to suit the surroundings.

Banmoo’s first store, covering only 23.5㎡, opened in Madang Road, Shanghai, in 2006, where we had the first batch of faithful fans.

As more designs were released, we opened a bigger store in 2008. A historical building by Suzhou River was transformed into Banmoo’s Shanghai Loft Boutique. In the same year, the “Boat Bench” won EDIDA China’s Furniture of the Year award, participated in Dutch Design Week, and was acquired by Today Art Museum in 2009. Banmoo also appeared in Milan Design Week and Poly Auction, and received wider attention from the press and consumers.

According to some foreign media, Banmoo grows with China’s middle class and represents a force of Eastern cultural renaissance. For Lv Yongzhong, he counts himself fortunate to be able to work and communicate with a wider range of people. Great amount of energy is consumed in the fast development of China, and Banmoo, as he wishes, is like a gate. When you enter the gate, your values and lifestyle are changed, and energy flows back into your body.

Every piece of BANMOO furniture is designed by Lv Yongzhong. He rarely uses the computer, but draws his ideas on paper with the precision of a technician and perfects the initial sketch with utmost seriousness. 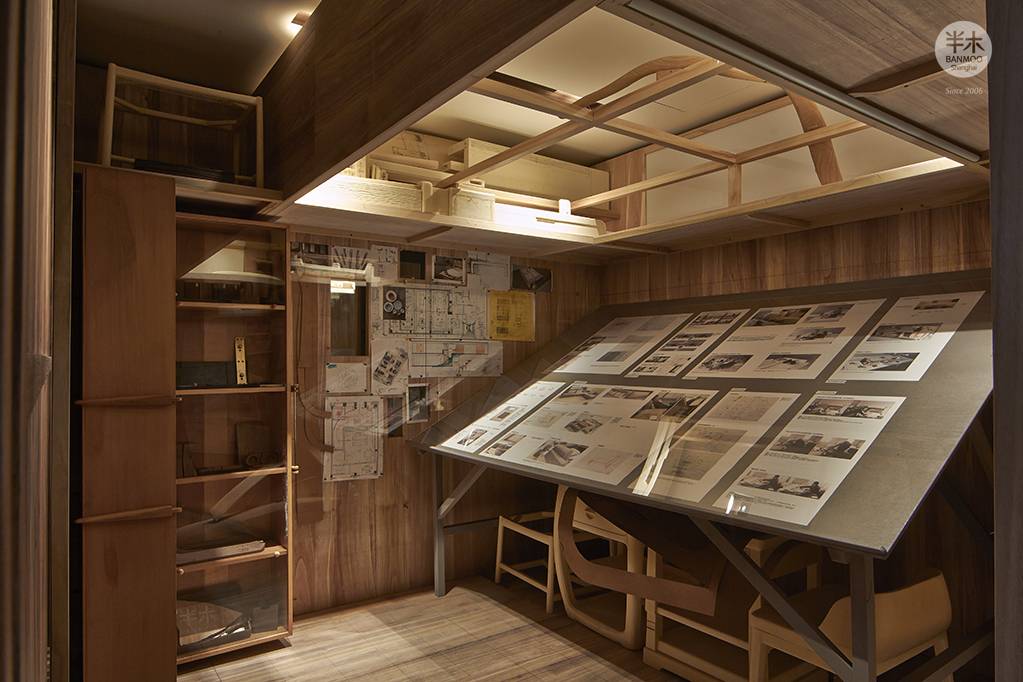 There is a sketching room in Shanghai Banmoo Home. A huge easel, surrounded by all kinds of tools, takes up half of the space. This is how Lv Yongzhong works. The easel must be huge and all the tools be at hand. When he finds a thread in the expanse of imagination, work is instantly started. 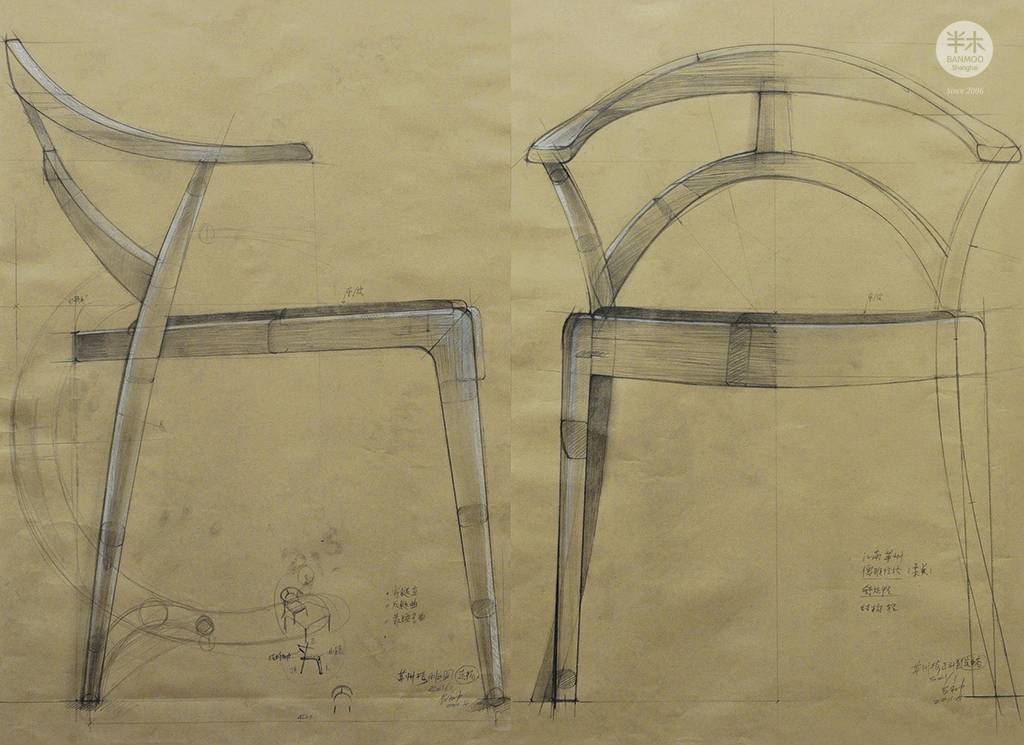 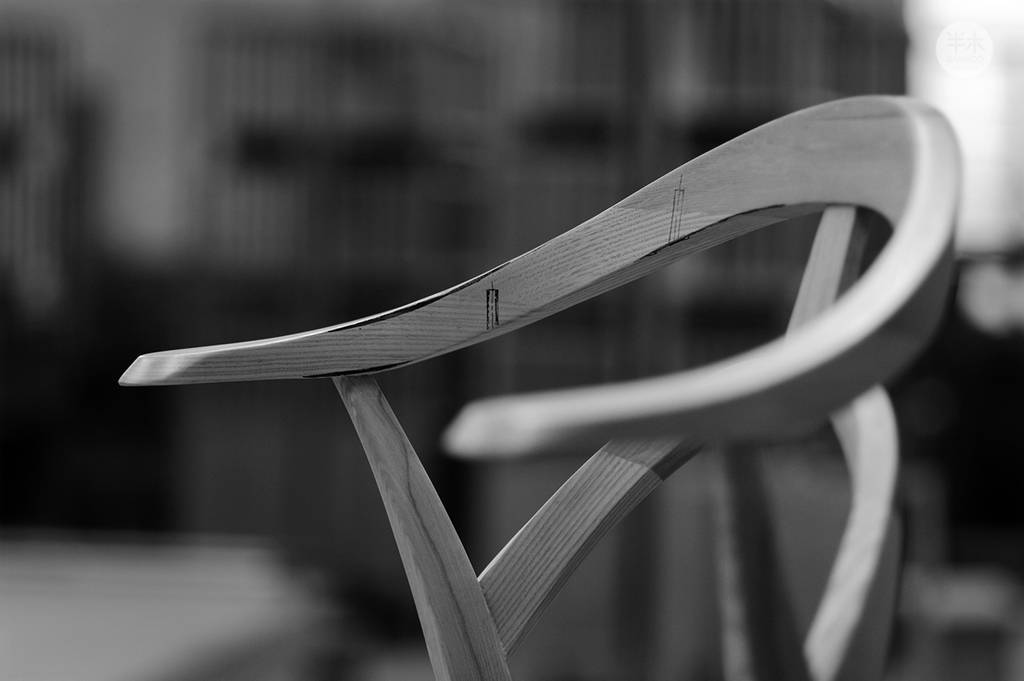 Inspiration comes in a flash, while painstaking work needs to be done to turn it into a product. The Suzhou Chair took two years to finish, a counter-example to the so-called “China speed.” Chairs are most difficult to make. They must be very stable and the design must help maintain correct spinal alignment. The chair appearing in the picture was already the sixth prototype for Suzhou Chair. Countless adjustments of its structure, curves, and technical details were made to ensure the quality of the final product. 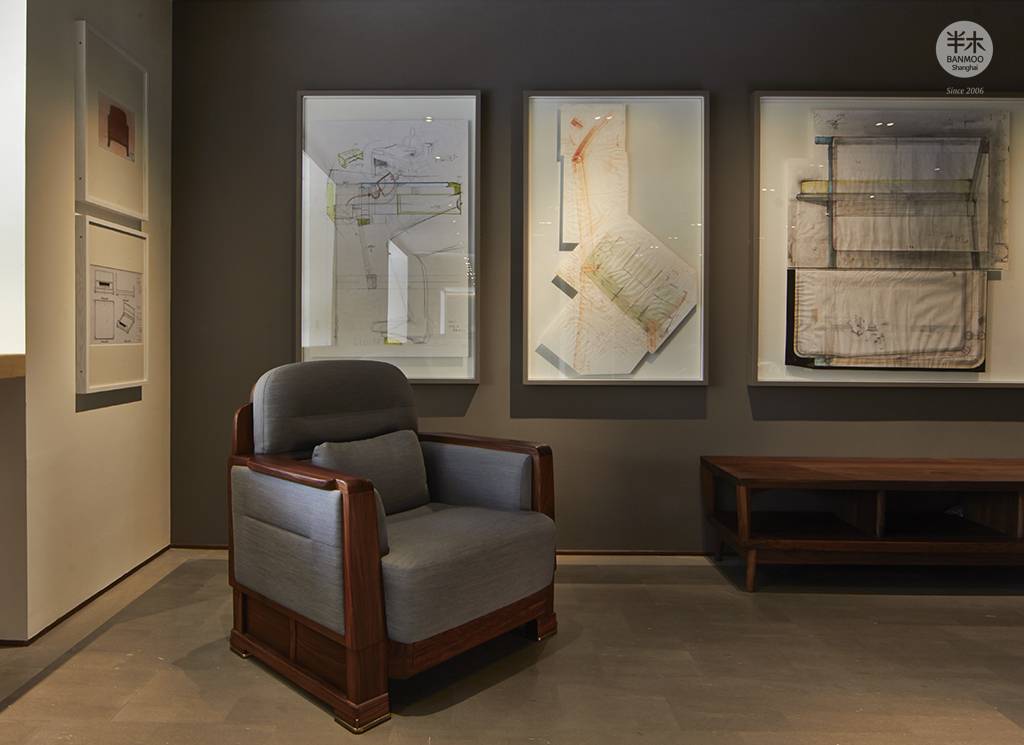 In this exhibition, we can see the front and side look of the Anhui Armchair overlaid with each other, a surprisingly powerful image. There is also a medical chart of sciatic nerve anatomy, which helps Lv Yongzhong design concave surfaces on the chairs. In the three showcases at the gate, you can see polyurethane models. Often used in automobile design, the technology endows Banmoo’s products with more 3D details and precision.

It is not unlike a sort of religious practice to repeatedly modify a product. Lv Yongzhong hopes that his works stand the test of time. Behind the visual pleasure of a product, there is great technological consideration to make it comfortable to use.

Shanghai Banmoo Home, opened in 2016, is Banmoo’s another interpretation of contemporary Eastern life after the opening of Beijing Banmoo Gallery. A representation of Banmoo’s notion of home, it visualized Lv Yongzhong’s endeavor to redefine Chinese living space, in which furniture and housewares speak for a certain lifestyle and inspire new feelings and possibilities.

The Chinese have a deep yearning for “home” that, according to Lv Yongzhong, is a place to recharge, to enjoy family life, and to pass on the tradition.

However, consider how busy we are, is it still possible to spend time at home with our family members? Lv Yongzhong placed a long table in the sitting room, replacing the sofa that used to be there. His daughter will do homework on the table after school. He works on this table too when arriving home. A piece of cloth will be placed on the table during dinnertime, after which the family sat around the table to read, chat and do anything they want…. Everything seems so natural, and change takes place with a simple change of the interior space. Without the big table, her daughter would do homework in her room and he would lay huddled in the sofa. “I believe she will feel happy when she grows up and looks back that however busy Dad was, he shared time with me after work.” 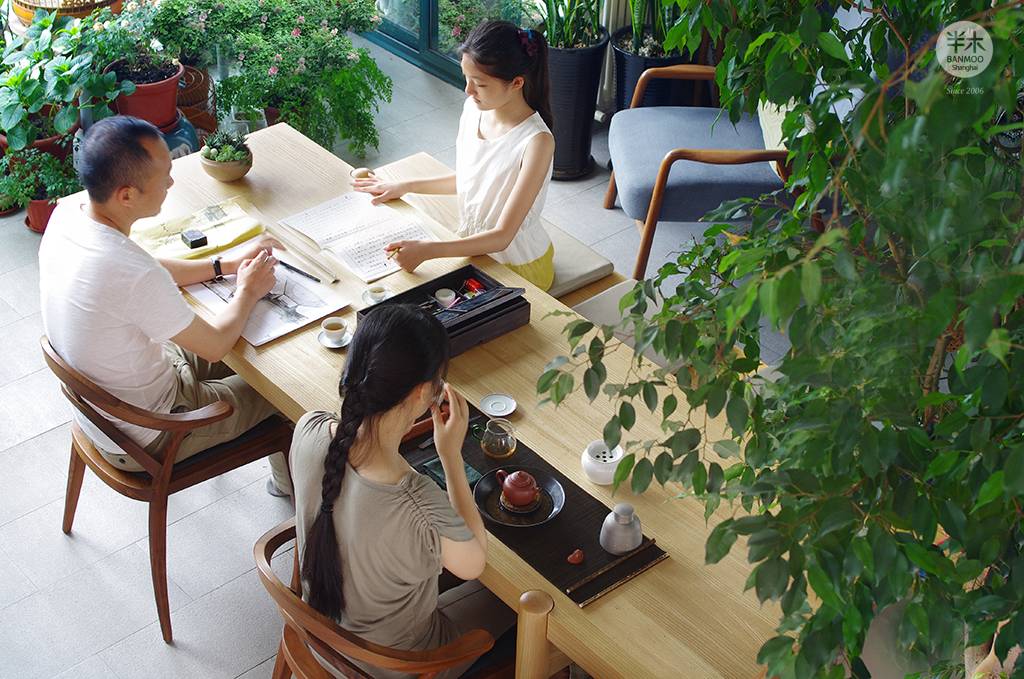 Sometimes we have no idea of what we need. Banmoo Home provides different solutions. A remarkable design is “Tea Sofa”. Westerners love to sit in sofa and drink wine, while the Chinese love tea. Lv Yongzhong designed a sofa suitable for tea. The Chinese are taught to sit upright since childhood as good manners. Therefore, in stacking up layers of sponge and down, Lv creates a cushion that is harder and comfortable. Practically the sofa incorporates tearoom into the sitting room and in a sense enlarges the home.

As to the tearoom, Banmoo offers three possibilities. The Inkstone Teatable, featuring a relaxing skin-like inkstone top, is ideal for a meeting of three or four people. The Octangle series, including tables, chairs and benches, is suitable for six or seven people. The Horizon series boasts a modern appearance and is suitable for those who enjoy SOHO lifestyle.

The 18 units in Banmoo Home provide 18 possibilities in an abundance of details and are bound to satisfy our dreams of an ideal home.

Banmoo has made its way through the first decade based on a small team. A frequent reproach was that Lv was too conservative.

Lv Yongzhong, however, firmly holds that China does not lack a listed company or a profit-hungry furniture manufacturer. China lacks paranoids. That is why China is recognized for big business but not good design.

Being paranoid means that one is not easily carried away by the trend. Design is deeply embedded in Banmoo’s genes. About future, Lv Yongzhong is dedicated to going further on the road he selected. Perhaps that is his “Chinese Dream”.